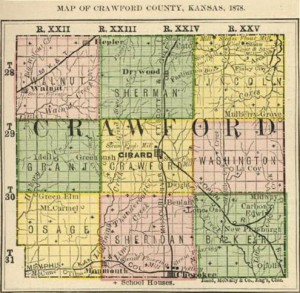 It was created by the act of Feb. 13, 1867, and was named for Col. Samuel J. Crawford, at that time the governor of Kansas. The area of the county is 592 square miles. It is divided into nine townships, to-wit: Baker, Crawford, Grant, Lincoln, Osage, Sheridan, Sherman, Walnut and Washington. The general surface of the county is undulating, the water-courses flowing in three different directions. In the northeast Drywood, Bone and Coxes creeks flow northward to the Marmaton river; in the west Big and Little Walnut and Hickory creeks flow southwest to the Neosho; and in the southeast Lightning, Lime and Cow creeks flow southward, their waters finally reaching the Neosho.

The County seat of Crawford County is Girard, while the largest population center of the County is Pittsburg. The courthouse is located on the square in Girard at 111 E. Forest.

Crawford County Kansas is known for its coal mining heritage and the settlement of many different ethnic groups who came to the United States in search of work in the coal fields. Because of the diverse background of our immigrant population, Crawford County is blessed with good foods (noted in our legendary chicken and steak restaurants, and the annual Festa Italiana), colorful festivals and lively music; and the friendly, hard-working people. Our communities are enriched by the opportunities provided by Pittsburg State University. Our five local school districts, through partnership and cooperation, are periodically noted as some of the top schools in the state.

At the request of the Board of County Commissioners in 2006 the County Clerk’s Office produced a multi-media presentation (see videos) about the history of Crawford County. If you would like to receive a copy of the CD containing the presentation please contact the Clerk’s office.

The Government of Crawford County is a three commissioner system. The Commissioners meet twice weekly (Tuesday and Friday), with the exception of holidays, in the County Courthouse at 10:00 AM. Seated with the Commissioners are the elected County Clerk and the appointed County Counselor. The Clerk and Counselor, in conjunction with the elected County Sheriff, Register of Deeds, County Attorney, County Treasurer, and appointed officials in the county, carry out the legislative policies of the Board. The Kansas District Court is also located in the courthouse.

* J. W. Wallace, Lafayette Manlove and Henry Schoen were appointed special commissioners and F. M. Logan county clerk, for the purpose of organizing the county. The first meeting of the commissioners was held on March 16, 1867, and the first order was one dividing the county into nine civil townships. The second order divided the county into election precincts. Another order directed the clerk to give 30 days’ notice of an election to be held on April 15, 1867, for the election of county and township officers, and to decide the location of the permanent county seat. At the election J. W. Wallace, F. M. Mason and Andrew Hussong were elected commissioners; F. M. Logan, clerk; and J. M. Ryan, sheriff. The county seat question was not decided at that time, and in September Crawfordsville was selected as temporary seat of justice.